The power of a small gift 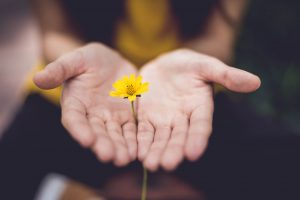 These days, giving some loose change to a good cause is pretty common. Whether it is a charity box by the shop till, or a local child with a sponsorship sheet, most people give a few pounds here and there through the month. On average, British people donate £27 a month to good causes.

Charitable giving wasn’t always this way though. Back before the reformation in the 16th Century charitable giving and care was provided almost exclusively by the church. Social aid for the needy was mixed in with medical care, and monasteries acted as hospitals as well as places the very young and the very old could go for food and shelter if they had no one else.

After Henry VIII shut the monasteries down, charitable giving had to be taken on by others. The modern tradition of Christian philanthropy was born with the very wealthy and pious building alms houses and hospitals for people who would otherwise have no shelter or care. The association with wealth and charitable giving persisted well into the 19th Century. People felt embarrassed about giving small amounts; giving had to be big and bold and glorious. Although giving was no longer just the domain of the super-rich, a charitable gift would have been one off and substantial and many people chose charities to support for life.

When President Franklin Roosevelt was elected US President in 1933, this changed. Roosevelt had suffered from polio just a few years before and had to learn how to walk again after experiencing debilitating paralysis. In 1938, during his second term as President, Roosevelt founded the National Foundation for Infantile Paralysis to combat polio. Stage and screen star Eddie Cantor encouraged people to give small amounts of money to raise funds for the organisation in the lead-up to Roosevelt’s birthday. He said, ‘nearly everyone can send in a dime’ and noted that everyone, even the children, would be able to show their support in this way.

Over the next month, thousands of people sent postcards to the White House with dimes stuck to them. The letters swamped the post room raising $268,000 in total. This strategy, encouraging people to give small and manageable amounts regularly, continued to be used by this organisation which became known as March of Dimes in the 1970s. Since then, other charities have taken on this strategy.

The great thing about small gifts, or micro giving as we call it today, is that pretty much anyone can do it. A dime is equivalent to £1.50 today. This is a manageable amount for most and it soon adds up.

People often don’t give to charity because they can’t give a big amount. When donating people want to be able to hand over £10 or £20, or even more. But the March of Dimes proved how powerful micro giving can be. A lot of people giving a small amount is just as good as a few people making a one off larger donation.

Would you like to be an Incredible Micro giver? We have set up a special micro giving page where you can regularly donate small amounts. Remember the golden rules of charitable giving – make sure you and your family have everything you need and if there is any leftover, think about how much you can afford to give. Never get into debt to donate.

This site uses Akismet to reduce spam. Learn how your comment data is processed.